Tom Jorling, is an attorney, advisor to MHTL, former co-drafter of the Clean Air and Water Act and former Commissioner of the New York State Department of Environmental Conservation under Governor Mario Cuomo. Tom Jorling served under 4 presidents, including Deputy Director of the Environmental Agency. Mr. Jorling was the recipient of the inaugural Boston College Law School Public Interest Law Foundation Distinction in Public Service Award in April 2019. Thomas Jorling pens the article below on the attack of the Rule of Law. 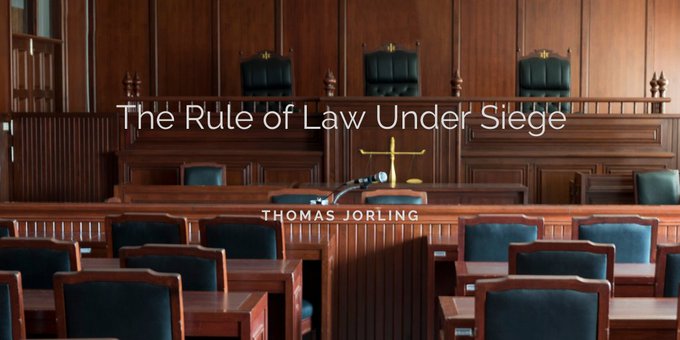 Following the 2008 economic crisis, Congress responded with banking reforms, including one, often colloquially called a stress test, to assure banking institutions could survive and function in a future financial crisis. The Covid-19 pandemic, coupled with an increasingly authoritarian presidential administration, is challenging our nation, our institutions, even individual citizens with a more fundamental ‘stress’ test; raising the question whether our basic principles, institutions and values will survive this crisis intact.

This pandemic could not have hit the United States at a worse time. We are led by an administration that relishes ignorance of our history, our Constitution, and our basic values. Consequently, as a nation we are facing the ultimate testing of our foundation: the rule of law.

The rule of law and the respect citizens have for it, is what enables our democracy to flourish. It is the sine qua non of our freedom, our liberty, our security and our future as a prosperous, decent and just civilization. But, at this time, in this nation the foundation of the rule of law is showing deep and disturbing cracks. We are experiencing a national administration and an ideology that aids and abets divisiveness between and among people; that debases and politicizes our most basic institutions and processes from separation of powers, to justice, to truthfulness and accountability. Let us look at these elements in turn.

Instead of appealing to what Lincoln in his First Inaugural Address called the “better angels of our nature” the current administration appeals to man’s dark underbelly. He does not seek to lift people up, but seeks to diminish and demean those who may disagree with or oppose his policies and actions. It does so using the cowardly tools of humiliation and bullying. It often uses ‘dog whistles’ to incite behaviors that encourage incivility, often suggesting, even encouraging violence. For instance, the President’s implicit and often explicit support and praise of demonstrators challenging public health recommendations and orders including demonstrators bearing weapons of war, such as the recent display at the state capital in Michigan, represents a step, a long step away from the rule of law.

The rule of law is being challenged, ironically, by lawmaking bodies.

These include Congress where the United States Senate and its majority leader are preventing Bills that have passed the House of Representatives from being given even a vote in the Senate. Important legislation to address problems the nation is facing are buried beneath abuse of the filibuster rule thereby preventing measures from being advanced to even a vote; a publicly recorded vote which is the essential vehicle of accountability of elected Congressional representatives.

Even worse are the abuses of state legislatures, following the lead of the federal Administration, to gerrymander districts to preserve what is, in effect, undemocratic power. Also State legislatures, again with the encouragement of the national Administration are erecting barriers and measures of voter suppression to partisan advantage. This is an especially repugnant insidious attack on democracy and the rule of law.

The starting and ending point of our system of justice is the rule of law and its premise that the justice system is independent; that it is carried out with fairness and devoid of any political or other outside influence. We are now witnessing under Atty. Gen. Barr the Department of Justice conducted as a political tool to benefit the president’s personal and political agenda. In its investigative and prosecutorial roles we have witnessed both perceived and real examples of favoring political allies and harassing political adversaries. Increasingly, the Department of Justice is being perceived as a partisan institution deeply eroding respect for the rule of law.

The filtering and appointment of ideologically conforming Justices is fundamentally undermining respect for the Supreme Court of the United States and its rulings. There is a growing view in the public that the Court has become just another politically partisan institution, further weakening the people’s trust in the rule of law.

In the Constitution, our founding fathers created the framework for the rule of law is the operational mechanism governing our personal, institutional and governmental conduct. One exceedingly important element in maintaining and perpetuating the rule of law is the separation and distribution of governmental power in the three coequal branches of government. The separation of powers is the most solid bulwark against any drift into tyranny and authoritarianism. But the separation of power is not self-executing or automatic; it requires the individuals who occupy any and all offices within the three branches to respect and honor the importance of the separation of powers and conduct themselves accordingly if our democratic system is to endure.

For instance, officials of the executive branch must recognize the legitimate role of the legislative branch not only to make laws, but also to conduct oversight of the executive branch to assure that all officials from the president on down faithfully execute the laws of the United States without fear or favor. Any executive branch official who frustrates the responsibility and duty of the legislative branch to conduct oversight, as the President and many in his administration are doing by not appearing for oversight hearings, even ignoring lawful subpoenas, is damaging the rule of law. The removal of multiple agency inspectors general is an egregious example of avoiding accountability. Such abuses weaken the very institutions that assure public servants serve the people and not their own self or partisan interests.

Those in positions of power, elected or appointed, in each of the three branches of government do not respect and adhere to the separation of powers it risks answering in the negative the question Abraham Lincoln raised in the Gettysburg address “whether this nation… So conceived can long endure”,

The integrity and respect for the rule of law is dependent upon, and cannot be divorced from the search for truth. It is why in the administration of justice perjury and fraud are treated with such seriousness. Every aspect of our culture, of our society, and of our relations between and among citizens is dependent on, and presumes truthfulness and trustworthiness. If these basic presumptions are eroded we are destined to slide into a brutal and disintegrating community. And we are witnessing that erosion as never before. Our system, our rule of law cannot sustain acceptance and tolerance of lying by our political leadership. And yet, according to an inventory carefully tabulated by the Washington Post, our leader, the President of the United States has, on more than 18,000 occasions so far during his term, lied or misled the American people. A culture, a society unmoored from fact and from truth cannot long endure.

In no nation, in no society are Democracy and the rule of law foreordained to endure. They can and have slipped away from many nations. We have been blessed by our forebears with a Constitution and a commitment to the rule of law it enshrines. Maintaining it, however, takes vigilance; it take commitment and it especially takes honorable action to assure we pass on to the next generation a government of, by and for the people, based on the rule of law. We must step up to the challenge. We must insist on a government that is as good, as honorable and as trustworthy as its people.

Murphy, Hesse, Toomey & Lehane, LLP is proud to announce that Attorney Kathryn Murphy, a Partner at the firm, has been selected as a Top Women of Law 2022 honoree by Massachusetts Lawyers Weekly. The honorees are selected based upon their “ significant contributions to the legal profession while also serving as role models for women entering the law.” Ms. Murphy is the first attorney at the firm to receive this prestigious honor. She has been practicing law at Read More

On August 10, 2022, Chapter 177 of Acts of 2022, “An Act Addressing Barriers to Care for Mental Health” was signed by Governor Baker. For public schools, it has impacts on student discipline, special education services, and emergency response plans. The bill goes into effect on November 8, 2022. Set forth below are summaries of the new law’s impact in the identified areas.