Congratulations to Charles F. Desmond, Ed.D., for being recognized by the Massachusetts Black and Latino Legislative Caucus (MBLLC) for Black Excellence on the Hill! Charlie has made numberious contributions to society, as well as MHTL as a member of the firm’s Advisory Board.  The MBLLC Black Excellence on the Hill event was held at the Massachusetts State House on Wednesday February 4, 2019, and those in attendance include Representative Carlos González, Representative Bud Williams, and Representative Chynah Tyler, who recognized Charlie as an Honoree at the event.

Over the last four decades, Dr. Charles Desmond has had a long and distinguished career in higher education.  He presently serves as the CEO of Inversant, the largest parent-centered children’s saving account initiative in the Commonwealth. He is the past-chair of the Massachusetts Board of Higher Education and was a higher education policy advisor to former Governor Deval Patrick. In many and varied roles, he has been at the forefront of educational access, retention, and college completion issues for low and moderate-income citizens here in the Commonwealth and across the nation. A Fulbright Scholar and philanthropic leader, he has been a tireless advocate for increased attention, support, and engagement with programs serving at-risk children, adults, and the communities in which they reside. He is Chair of the University of Massachusetts-Boston’s Board of Visitors; he also served the University as Associate Chancellor and as Dean of the College of Public & Community Service. He earned his Education Doctorate in instructional leadership from the University of Massachusetts Amherst, and his Bachelor of Science degree in Sociology from Northeastern University. He has received numerous honors and awards from local and national organizations and he is the recipient of three Honorary Doctoral degrees bestowed by Framingham State University, Westfield State University and the Massachusetts College of Liberal Arts. He is a twenty-one year member of the Danvers Human Rights and Inclusion Committee and President of the Friends of the Danvers Human Rights and Inclusion Committee. He is a past Chair of Building Bridges Through Music in Lynn and his current roles include service as a Trustee of Teachers College, Columbia University; Senior Fellow of the New England Board of Higher Education;  member of the North Shore Medical Center Board of Trustees; and Chair of the Advisory Board of the University of Massachusetts-Amherst College of Education.  He is on the Advisory Board of Murphy, Hess, Toomey & Lehane, LLP, a member of Alpha Phi Alpha Fraternity, Inc., and a decorated veteran of the U.S. Army, receiving both Silver and Bronze stars. He visits Selma, Alabama annually to honor the Civil Rights Movement past and present during the re-enactment of the Bloody Sunday march. Dr. Desmond is married to Phyllis Boyd Desmond; they have three children and one grandchild. 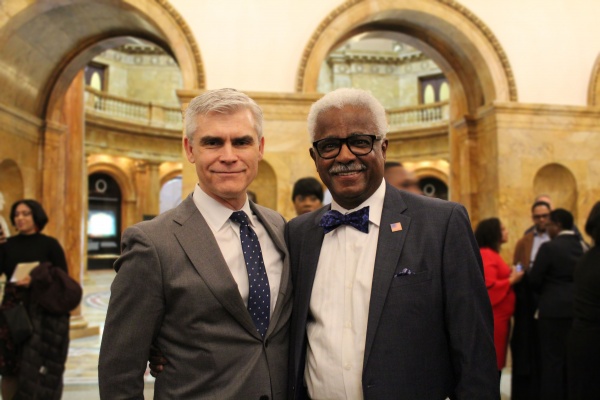 (Pictured above is Charlie with Dr. Michael Thomas, President and CEO of the New England Board of Higher Education at the event.)

Murphy, Hesse, Toomey & Lehane, LLP is proud to announce that Attorney Kathryn Murphy, a Partner at the firm, has been selected as a Top Women of Law 2022 honoree by Massachusetts Lawyers Weekly. The honorees are selected based upon their “ significant contributions to the legal profession while also serving as role models for women entering the law.” Ms. Murphy is the first attorney at the firm to receive this prestigious honor. She has been practicing law at Read More

On August 10, 2022, Chapter 177 of Acts of 2022, “An Act Addressing Barriers to Care for Mental Health” was signed by Governor Baker. For public schools, it has impacts on student discipline, special education services, and emergency response plans. The bill goes into effect on November 8, 2022. Set forth below are summaries of the new law’s impact in the identified areas.

By submitting this form, you are consenting to receive marketing emails from: Murphy, Hesse, Toomey & Lehane, 300 Crown Colony Drive, Quincy, MA, 02169, http://www.mhtl.com. You can revoke your consent to receive emails at any time by using the SafeUnsubscribe® link, found at the bottom of every email. Emails are serviced by Constant Contact